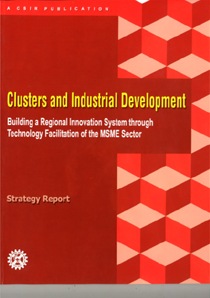 The present volume puts together some of the outcome of the Technology Facilitation Centre during the period January 2014 and April 2016. This programme which originated during 2013 as a joint initiative of Government of West Bengal and the Council of Scientific and Industrial Research, was developed with an objective to establish a networking organization and put in place an information resource base that would play a catalytic role in bolstering the competitiveness of the micro, small and medium industry sector of West Bengal. The programme initially took shape as the sequel of a video-conference meeting between Director-General, CSIR; Principal Secretary of the Department of MSME&T, Government of West Bengal, Director of CSIR-CGCRI and the Head of Planning & Performance Division, CSIR Headquarters. The need of evolving a joint platform for synergizing the activities of CSIR with the requirements of the State of West Bengal was highlighted and resolved to be addressed.

Assessment and Mapping of Manufacturing Clusters

Objectives, Scope and Approach of the Technology Facilitation Programme