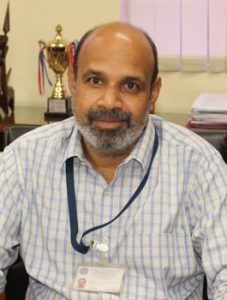 Dr. Kuttanellore Muraleedharan, an acclaimed scientist in the area of electron microscopy and physical metallurgy, took over as Director of CSIR-Central Glass & Ceramic Research Institute (CSIR-CGCRI) with effect from August 5, 2015.

Dr. Muraleedharan was born on October 15, 1960 in Thrissur, Kerala. Dr. Muraleedharan earned his B. Tech (1983) and Ph. D (1994) from Banaras Hindu University-Institute of Technology (BHU-IT), Varanasi. He started his career journey from Defence Metallurgical Research Laboratory (DMRL), Hyderabad as a Scientist in the year 1984 after a short tenure as Graduate Engineer Trainee at the Mishra Dhatu Nigam (MIDHANI), Hyderabad. It was under his able leadership that the electron microscopy facility at DMRL developed to international standards. Dr Muraleedharan has also been a member of DRDO think tank, G-FAST where he made significant contributions in forecasting and creating DRDO road maps in materials related areas like Materials for Armour, Hypersonic Vehicles, Electronic and Functional Applications, Stealth etc. He superannuated on October 31, 2020.